February is the shortest month of the year, but this letter will be the longest. Jessica Konrath has implemented your access to NACCT 2020 symposia on the AACT learning portal. Now you can relive and review some of the great content from NACCT 2020 and obtain more continuing education by viewing additional symposia you missed. There are many great recorded lectures, from our AACT sections and guests like APAMT and SOT. Do not forget to submit a Question of the Day as you read toxicology literature. It is fun, easy and solidifies your knowledge by teaching. The membership app is in production and should be available in the Spring. Please respond to the email survey about your attendance preferences for NACCT 2021.

This month is also Black History month, so I thought AACT should celebrate the life of Michael Shannon, MD. He was influential to me in my early career, but I thought the best person to speak about him was his dear friend AACT Past-President, Alan Woolf.

February is Black History Month. I am grateful to Kirk for this opportunity to share with AACT members, some thoughts and memories of the work and legacy of our friend and colleague, Michael Shannon, who passed away in 2009 at the too young age of 55 years. I worked closely with Michael in all things toxicological: from our work in the poison control center answering calls, on our toxicology admitting and consult services, in our children’s environmental health clinic, teaching in our medical toxicology fellowship training program, and in our Region 1 New England Pediatric Environmental Health Specialty Unit (PEHSU). Michael and I collaborated as medical toxicologists in providing oversight and expertise for our Massachusetts/Rhode Island poison control center 24/7/365 for 20 years. Losing him was, for me, like losing a brother.

Michael was quadruple-boarded (pediatrics, medical toxicology, pediatric emergency medicine, emergency medicine) and was the first African American man to be promoted to Professor of Pediatrics at Harvard Medical School. He left a huge legacy in his untimely passing and even today is not done teaching us. We all benefit from his scientific research, writings, and professional accomplishments. Many of you in the AACT were trained by Michael or experienced his clinical and teaching expertise firsthand. Others worked with him on an AACT or ACMT committee, or a board, or in another toxicology or emergency medicine professional organization. Others have pursued research projects built off his groundbreaking scientific work and the seminal scientific papers he published. He authored or co-authored over 300 papers and six books, serving as Editor of a leading toxicology textbook: Clinical Management of Poisoning and Drug Overdose.

Michael had a presence that was warm and appealing; his demeanor was always assured and calming. (Not a bad disposition for the occasional frenetic chaos in an emergency department!) He had an unforgettable smile and a tremendous sense of humor. He had a reductionist thinking process that brilliantly captured the essence of any clinical or research issue. He was passionate about toxicology and his energy was infectious. He led research investigations into the toxicology of drugs, such as theophylline, children’s cough and cold medicines, and tricyclic antidepressants. He was curious about how the emerging problem of crack cocaine in the 1980’s affected children. Specifically, how frequently young children were inadvertently exposed to second-hand crack smoke (About 3% of random urines from young children seen in an urban emergency department had detectable cocaine metabolites.) Indeed, as Michael so often would say, children were once again the canaries of an environmental problem. Like so many of us after 9/11, he became interested in emergency preparedness for disasters and he made significant contributions to the national dialogue on how preparations for responding to such disasters should include children’s needs.

Michael was a world-class expert in childhood lead poisoning and defined a new high-risk population: those children with autism and pica habits. Michael’s talent for risk communication and his advocacy for making the environment better for children were showcased with respect to childhood lead poisoning. Lead poisoning disproportionately affects many more children in low resource communities of color. Michael was passionate about and constantly working to address and correct this health disparity. Through our PEHSU and his public health work, he was able to engage the media to get across simple messages about lead poisoning prevention. He was a tremendous advocate for children and their families. He was devoted to the idea of improving the health of children through positive changes that we can make in their environments, whether at home, daycare, school, work, or elsewhere. In 2010, the EPA gave Michael a posthumous lifetime achievement award, a tribute he so richly deserved.

Michael was a gifted contributor and leader on issues of clinical toxicology and poisoning in our toxicology societies in the United States. He served on the Board of Trustees of the AACT and achieved the high honor of being selected as an AACT Fellow. He was a featured speaker, visiting professor and educator of poison center personnel for the AAPCC. He served as president of the ACMT at a pivotal time in its growth and development. Michael was an ardent student of the history of toxicology and he took great pride in his membership in the AACT’s Toxicological History Society (THiS). He presented different papers in the THiS sessions at many NACCT meetings. He also spoke eloquently about toxicological scientific issues at NACCT sessions and frequently taught internationally at congresses of the EAPCCT and as a visiting professor in many countries.

Michael brought his infectious energy to rounds. He had a presence that was compelling. Like a superstar on any team, he made all of the other players better. He brought out all their skills and the best in them, whether they were students, residents, fellows, nurses, pharmacists, or others. So, let us pause during Black History Month to reflect on this great man, in celebration of his life and his substantial body of work. He contributed both to the practice and the science of clinical toxicology. However, his legacy is more than that. His smile; his warm and generous personality; his positive and inclusive spirit; his scientific rigor and integrity; his abilities as an effective leader and communicator; all of these embody Michael’s enduring gift to us all. 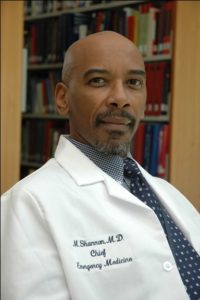 Thank you, Michael Shannon, for sharing your incredible life with us. Thank you, Alan Woolf, for re-connecting us to an AACT member who was a person we should all hope to emulate. As AACT members we must continue Michael Shannon’s vision to dedicate our practice, teaching and research to those with health-care disparities, and diversify our membership to match those we serve.

Volunteer for a committee, as a section chair, student chapter mentor, author Question of the Day and more!